A METHOD OF LOVE….

Having a Black Male Child, a Mother/(parent) worries, fret’s over, prays for, and fears just a bit more, than what may be considered normal for that child; that part of her in which she has birthed, loved, raised, and set free, into this sometimes cruel, and unforgiving world.

With Recent light being shed upon a problem in which has long existed in our community I can’t think of a mother in which I can count amongst my associates, who aren’t doing the things that I mentioned above in an even more fevered fashion. Is it possible though, that the resolution to these current situations have already been obtained and its just Really Now Time to take Heed?

M.L.K Jr. once stated that “MAN MUST EVOLVE FOR ALL HUMAN CONFLICT; A METHOD WHICH REJECTS REVENGE, AGGRESSION, RETALIATION. THE FOUNDATION OF SUCH A METHOD… IS LOVE!”

Love as a foundation huh???

Now, I know that I’m only a self-proclaimed genius, but often times genius recognizes the same qualities in others, and It  my opinion, that, Dr. King might have been hitting on something quite profound here…

You see, we’ve already tried the other B.S. and the effect of that has more often than not, left us cold, empty, and in a state of insanity. So I, for one am willing to try & support ‘LOVE’ even if for no other reason than, it seems like one heck of an optimistic place to start.

~Be blessed my dear friends and be a wonderfully, wonderful, you!~

DON’T Count ME as one of Your KIDS when I couldn’t Count on YOU as MY DAD!!!

I’ve always kind of wondered about what goes on within a man’s essence? What is the make up of his very being? This questioning of the male genetic compound initially started when I realized that some guys just liked/ loved some females harder, better, gentler, more respectful, than some others. It could be regardless of if they were doing very similar or even identical things for him. Regardless of whom others perceive to look better, regardless of the one in which others perceive to have the more likable personality. It’s all about what makes sense to that ever confusing individual of a man.

After years of really trying to process how all of male complexity works I’ve come to understand that the male mind may truly be something in which I may NEVER understand, but its puzzling factors extend far beyond women, Their poor misguided complexities even lead carry over onto their very own offspring.

I guess, that over the years, I must’ve  noticed this issue passively but nothing stood out as prominently as when My son and I had to make a visit to our cities Juvenile Court Division to get some adjustments made to the very small child support order that his Father had been compelled to pay when my son was about 7 months old.

I can almost laugh at this now, (no really I can’t but I wish that I could) but even though his Fathers payments were less that $140.00/mth. (and that was over 18 years ago) he still managed to find himself with about 3 more biological children, 2 stepchildren (that he refers to as his own) and $22,000.00 in arrears for our child add those facts to the fact that he had a son born prior to the one we had together making my son, his second child, well then, I can see, where some comedy might be able to be inserted given the fact that we’re now talking about a family unit akin to what a small orphanage must be like.

But anyways, not to digress, It was at  this court hearing that my son, Trenton, and his first sister (from his bio dad) were able to see one another. This is something in which they had not been able to do in quite some time. To capture the moment I took a picture to capture the moment. They kinda look alike don’t they? 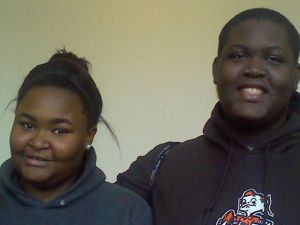 (“She lives with their father and is wearing the New “KOBE BRYANT” or LBJ or whatever expensive NIKE basketball player tennis shoes on her feet (that she confirmed her ‘daddy’ bought her). Whilst on the very next day i had to take out a loan (with interest) to pay for the 2 installments of the college tuition that is owed to the University our son is attending this semester (& the next) his freshman year and beyond… I post this only because I don’t understand, and would like someone out there to tell me how a male picks and chooses which children they will love and take care of over those in which they do and will not.

If you have any relevant insight into matters such as this, please use your words to Speak Up! – Thank you in advance!

NOTICE: Their Bio Father Jimmie L.Campbell Jr is absent, from these pics, because that’s just his way, his “M.O” for being ABSENT is just simply “His thing”, and has been that way for years, and I am sure, will continue to be that way for years to come… I guess by this time I should just give up all hope of him being my son’s Dad, because really, I’ve already done his job.